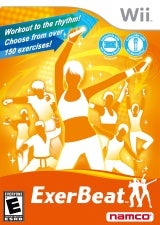 In my quest to lose weight and get fitter, I find my Wii a great help. I can’t be doing with Wii Fit – a load of nonsense – but I have Wii Zumba Party, which is surprisingly hard work, and serves to remind me that I “dance” like an elephant,  and also a My Fitness Coach Cardio Workout, a boxing game, which is even harder, but huge fun. I wanted something that sort of combined the two, and Wii Exerbeat looked as thought it would do the trick, so I pre-0rdered it on Amazon and it arrived last week.

Readers, it drove me crazy. It is targeted at families, and parts of it are dumbed down beyond belief. You cannot get at most of the exercises until you’ve done a load of the basic ones to unlock them, and then you have to do this appalling “round the world” thing between exercises, where the Rhythm character (I kid you not), bounces about while you walk round the world, using miles you have “earned” doing exercises, with about twelvety presses of button A each time. I nearly threw it out of the window.

Then suddenly I managed to unlock the bit where you can get the game to do you an exercise programme right the way through. And the bit where you can set up your own programme of routines. You still have to suffer the infantile round the world thing at the end of it, but it’s much less irritating if you only have to do it once.

The sessions it sets up for you are good – couple of warmups to start, and a couple of stretching ones to finish, and this morning’s routine left me sweating. There are aerobics, hiphop and latin dancing, karate and boxercise, yoga and stretching, and I can see that it’s going to fall into my heap of favourites.

Sad to relate, though, my Wii balance board appears to have died 🙁 Pete is going to prod it later, but I’m not hopeful …